The Elemental Method postulates the existence of eight distinct forms of grace (elemental types). Every individual has an essence which expresses one of these forms of grace. The Elemental Method identifies Earth (Embodiment), Air (Inspiration), Fire (Assertiveness) and Water (Receptivity) as requisite ingredients to any healthy moment of personality functioning. Earth and Air function as polar opposities, as do Fire and Water. Each person, in their essence, is dominant in one polar aspect from each of these two pairs. Significantly, however, within each individual one of the two dominant aspects is more dominant than the other. Thus there are eight individual elemental types established: 1) Earth-Fire, 2) Earth-Water, 3) Water-Earth, 4) Water-Air, 5) Air-Water, 6) Air-Fire, 7) Fire-Air, 8) Fire-Earth.

Before explaining the Elemental Method, I believe it is only fair that it initially be asked to justify its potential relevance. To that end, I will note that what the Elemental Method can accomplish for the person who knows it, not as information, but as a natural way of relating to ‘other’, is to perceive an essential fairly stable grace in opening to people, pets, and places.

An elemental type is considered of no use, and is in fact seen harmful, at least potentially if not inevitably, when it’s being perceived as a mere intellectual act. The value in perceiving the elemental type in ‘other’ is to more fully receive the other, so that the grace of the other is experienced by the perceiver. This way of knowing ‘other’ is not intellectual in nature; rather it is spiritual-emotional, primarily.

So, then, the Elemental Method is being offered primarily as an empathic tool. Importantly, empathy can be directed toward self as well as other, and the Elemental Method can be beneficial for both of these uses. It is hypothesized that persons of any particular elemental type may share in their valuations of each of the eight types. Putting it more simply, persons with the same elemental type may see things in fairly similar ways.

Each person, animal, or place is viewed as being imbued with a particular form of grace. It is quite difficult, if not impossible, to describe grace of ‘other’ as experience by the perceiver. What does it mean, after all, to experience the grace of another? 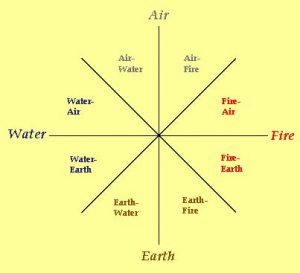 What the graph can also accomplish is help introduce the concept of ‘elemental opposites’. Every elemental type has an elemental opposite. For example, for the Air-Water type the opposite type is Earth-Fire. Elemental opposites are often chosen by persons in Western culture as partners for their primary relationships, as far as I can see.

Importantly, I am not in any way establishing a new criterion for empathy. Empathy without the experiential receiving of the other’s particular elemental type of grace can, as I see it, be very helpful for the other (and for the perceiver, inevitably, as well). I am merely pointing out that the experiential appreciation of the elemental type of an ‘other’ can be distinct from other forms of empathy, even those where the perceiver notes the other’s immanent relationship to the Divine. It should be said that empathic appreciation of an other’s elemental type is sufficient but not necessary for the encounter of perceiver and other to be constructive.

At some point in my development of the Elemental Method, as early as 1998, I began to recognize the value of multiple sets of terminology for the representation of the Elemental Method in different arenas. And so the archetypes of Air, Fire, Water and Earth became secondarily represented as Inspiration, Assertiveness, Receptivity and Embodiment, respectively. Most recently, I have added a tertairy representation of Air, Fire, Water and Earth as Spirit, Mind, Heart and Body, respectively. The latter representation seems to best serve laypersons, whereas the second representation seems to best serve academic psychology, a field enormously reluctant, as I see it, to dwell in the archetypel realm. Since words can not really be replaced without losing some of their meaning, as I see it, all non-archetypal representation of the Elemental Method lose something in their translations away from the more primal, less-differentiated original terms.
If places have elemental types, as I claim, and if elemental types affect us, as I have claimed, then where we choose to live, work, shop and spend our leisure time has great potential significance. Other factors being equal, the elemental type of the places we spend our time can enhance or disturb our lives. I have often noticed with fascination how the architectural styles of different communities reflect an implicit incorporation of elemental type, as I see it. We may feel most enhanced being in places which have our own elemental type!